A day at Vergelegen Wine Estate in Sommerset West 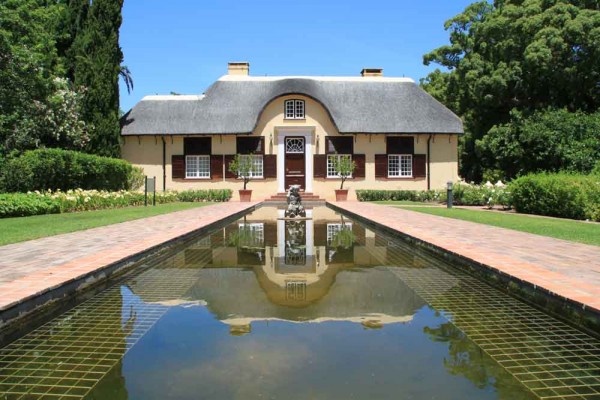 If one spends a few days in Cape Town, one is not only on the loose in the city centre with all its sights, which are a must when visiting Cape Town, but also in the surrounding area. On the way to the bay of Hermanus we decided to stop at Sommerset West at the winery Vergelegen. The travel guide had made us curious with such descriptions as "most impressive winery", "over 300 years old camphor trees" (National Monument) and also "over 300 years old mansions in Cape Dutch style". Statesmen and celebrities were already there, so we should not miss them.

The garden of Vergelegen is worth an excursion

A good hour outside of Cape Town lies the small town of Sommerset West on False Bay. In the countryside at the edge of the village you will find the winery. At the driveway one has to pay a small fee. From the shady parking lot, the way led us to the tasting area, but we left it unattended, as we wanted to visit the beautiful buildings and gardens in the first place. The walk through the garden was already great and almost became a photo session. Also the beautifully renovated 300 year old buildings as well as the impressive camphor trees were worth this trip! The trunks look like elephant feet - but of giant elephants. After a longer walk, which led us, among other things, past a beautiful library, we came to the fine restaurant, which of course was fully booked out. When we explained that we only wanted to taste a bottle of wine and maybe some snacks, the very courteous staff rebuilt the lounge corner for the four of us so we could enjoy the wine.

A small stop at the Tasting Room of Vergelegen

On the way back we had to stop at the tasting area, since you are not allowed to leave this winery without your own wine in your boot! And since in some restaurants in South Africa it is allowed to bring one's own wine, we had to bring "provisions". Moreover, we found some restaurants in smaller villages that did not have a license to serve wine. Although some other restaurants have their own house wines, they are tolerant if you have found your favourite wine at another winery. Here one only has to pay a really small corkage. Recommendation: simply clarifying it in advance when booking a table.

You accept the following cookies by clicking on "Accept all" (for more information, see the privacy settings):